Skip to content
August 15, 2012November 15, 2012 Laura Watson
This past weekend was the 40th annual Falmouth Road Race in Falmouth MA on Cape Cod.  The race attracts thousands of runners from all over the world but has a tricky entry system.  Guaranteed entries are given to Falmouth residents and then a lottery is held for others who want to participate.  Even with a huge field of 14,000 runners, thousands still receive that devastating email that they were not chosen for the lottery that year.  As an alternative, they can choose to participate with one of the many well deserving charities who have entries to give out in exchange for fundraising.
For the first time ever, New England Organ Bank was chosen as one of the official charities and given five entries.  As the coordinator for this project, I was thrilled that we were chosen – we had been turned down in the past – and when I began recruiting runners for the team the response was overwhelming.  I had filled our 5 spots in about 36 hours so I went back and asked the race organizers if there might be a few more available.  They were happy to offer me 5 more, doubling our team and fundraising potential.  I found 10 runners, perfect to represent New England Organ Bank and willing to commit to the $1000 fundraising commitment.  Most had some level of personal connection to the cause and all were excited to be on the team and start fundraising.  By July 4thweekend we had already reached $6000.  I had hoped we could reach $12,000 by race day and we were on track to hit that goal.
In the weeks leading up to the race I got to know the runners a little better and we all worked together to help raise awareness for donation with media interviews.  Almost every team member was highlighted in his or her local paper and all together we had 12 placements including this great piece on the front page of the Cape Cod Times.  Everyone had a great story to share about why they were running the race for NEOB and why they were so eager to contribute to our cause.  This amazing team has raised over $17,000 which will fund education and awareness programs across New England encouraging people to register to be organ and tissue donors. I am so proud of my team and can’t wait to do it all again for Falmouth 2013. 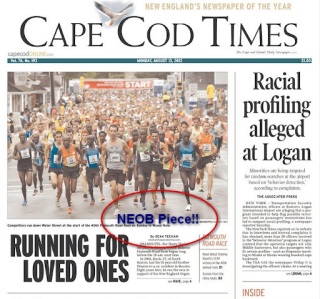 I want to make a special point of recognizing what a great race this was.  The Falmouth Road Race has been through a lot of changes in the past couple of years which isn’t always smooth for a longstanding a event like this.  I was impressed with the organization, weekend events and of course the amazing volunteers.  New England Organ Bank is very proud to be a partner of this race and looking forward to many more years of our runners on the course.
As for my race, it was not my best performance or best example of race decision making.  I woke Sunday morning in Falmouth (thanks to my awesome host and great friend Marisa Davidson and her family) to POURING rain.  We were happy to see it clear right before the race but the humidity held on tight and created less than ideal race conditions.  Dealing with some stressful traffic we met up with a few members of the NEOB team to take a team picture and then headed toward the start corrals.  It was very crowded (Falmouth is notorious for a sardine start) but I was able to sneak up to Corral 2 where I was seeded.  I knew it was warm but thought the cloud cover might offer some relief to what is usually a very sunny and hot run.  The race is 7 miles and while I have posted some quick times on this course I had planned to run it in a manageable 8 minute mile pace.  That pace felt good to me at the Finish on the 50 10k and this course is a little more challenging.  Once the gun went off I relaxed with the crowd and allowed my legs to warm up before picking up the pace.  My first mile was an 8:29 so I began to speed up a little bit.  I quickly realized that the humidity was really bothering me and I was going to have an uncomfortable race but I only had 6 miles in front of me so I had no reason to believe I wouldn’t be able to handle it.  I was able to pick it up to an 8:17 for mile 2 but wasn’t sure how much harder I could push and each mile I lost a few seconds.  Toward the end of mile 4 I realized it wasn’t going to get much better.
I jogged slowly at each water stop and was tempted to walk but looking at my watch I knew I needed to stay close to an average of 8:30 to come in under an hour.  There were times a felt a little light headed and very uncomfortable but with just a couple of miles to go I felt like the right thing to do was press on and give it all I had.
I crossed the finish line in 59:35 stumbling and seriously considering a trip to the medical tent.  I saw a teammate’s husband and found my smile for him to snap a photo of me and then took off to find some water.   Heading toward the finisher’s field I was thrilled to see good friend and Liver Team teammate Mimi Golub who also had a tough race.  I sat down next to her and we caught up a little bit but mostly discussed what crappy races we just had.  There was a quick celebrity sighting when a tall handsome guy walked by me.  We exchanged hellos just before I realized the familiar face was Chris Lambton of the Bachelorette.  Chris runs in memory of his mom raising funds for CCALS.  BTW, he’s super cute in person even after a sweaty race.  Way to go Peyton.
I finally made it to the field and was able to get down some juice and potato chips but I was still feeling woozy.  I sat down on the ground for a while and tried to have some conversations with old friends I was bumping into and teammates who were excited to see me after the race.  I rallied for some team photos and found my ride back to the house when my body finally turned on me.  I will spare my loyal readers the details but all that juice and the chips ended up back on the field.  Back at the house, I felt much better after a shower, some rest and the ginger ale and toast Marisa and her mother convinced me to eat.   Ugh, just not my day.
I can’t say I’m disappointed with my time.  It certainly wasn’t my best time on the course but even Olympic Champion Frank Shorter was quoted saying it was the hardest Falmouth he’s ever run.   I’m happy that I came in under an hour but question whether it was worth it when I felt so sick after.  It’s a fine line between pushing yourself to the edge and putting your health at risk.  I think I may have lost sight of that line on Sunday and maybe should have recognized the signs that it was not the day to ask more of my body.  The lesson is to listen to your body, because if you don’t your body will make spectacle of you while you throw up all over yourself in front of 10,000 runners.   Message received.
Anyone interested in joining the 2013 Falmouth Road Race team should keep an eye on our Facebook Page and we will have more information next spring.  To register to be an organ and tissue donor please visit www.donatelife.net.
Less than three months until the big race!  I take on the New York City Marathon on November 4th with the American Liver Foundation team.   Help me reach my fundraising goals by visiting my campaign home page: NYC Campaign Page!

I’m a wife, mom to a toddler and 40+ woman enjoying a new phase of life.  Here on the blog you will find links to recently published articles, reviews of my latest reads and fun posts about life in general.

Very full day at the @topsfieldfair. Had the best time. Refused to leave without a family photo. 🍁 🎡🍁
One year ago today, October 8 2020, I was at @boston_ivf to transfer this tiny embryo in hopes of conceiving our 2nd baby.
💕Three Months with this Beauty 💕
Let’s do this! 📚 🍎 ✏️